Worker ants are nasty creatures that are always beating up on other animals, possibly because of sexual frustration, or maybe they feel oppressed by their queens and take out their anger on non-socialists. Whatever the reason, their short tempers and vicious weaponry mean that ants are given a wide berth by most smart organisms.  This is probably why so many non-formicid arthropods try to look like ants. Here are two that we’ve collected as by-catch at Chamela.

(1) Pincher wasp (Dryinidae).  At first I thought “scary ant about to sting!”.  Then I thought “mantis pretending to be ant!”. Then “mantispid!”. Then “what the heck is it?”. Googling eventually brought me to the right family on BugGuide. Dryinids are both predators and parasitoids, which is quite unusual, and use their raptorial legs to grab hosts while ovipositing. Biology of this group is discussed here and here. 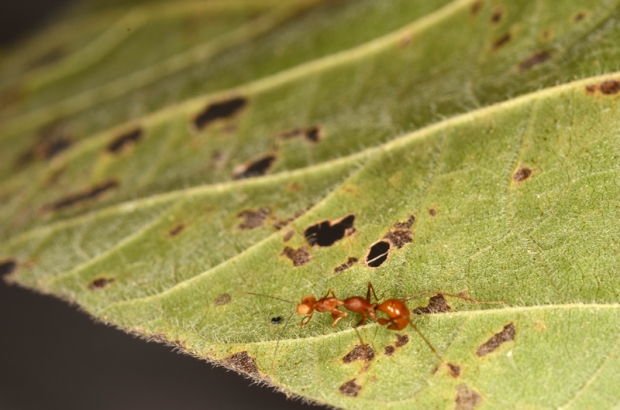 (2) Lacebug (Tingidae). At first I thought “Ant carrying a dead ant”. But it was behaving in a non-antly fashion so I took it back to the Chamela collections room and looked at it under a dissecting scope it was clearly a true bug. The fenestrations suggest that it is a lacebug. If it is indeed a tingid, then as far as I can tell this is a sufficiently rare phenomenon as to be unGoogleable. Has anyone else observed lacebugs that look like ants? UPDATE: I sent some of these to Laura Miller (West Virginia Department of Agriculture), a tingid expert, and they are indeed lacebugs. What’s more, they represent a new species of Aepycysta. Thanks, Laura!

Tingid at a distance, looking like two ants (at least, that’s what it looks like to me).

In addition to these formiciform insects, we have seen a lot of neat salticids that do an excellent job of pretending to be ants.