In his very long poem on the nature of poets, Jonathan Swift famously noted that parasites can themselves be parasitzed. A few weeks ago I came across an interesting case of hyperparasitism. I had washed a recently road-killed Yellow-bellied Sapsucker. It yielded many lovely mites and one feather louse. I slide-mounted the latter and representatives of the former. 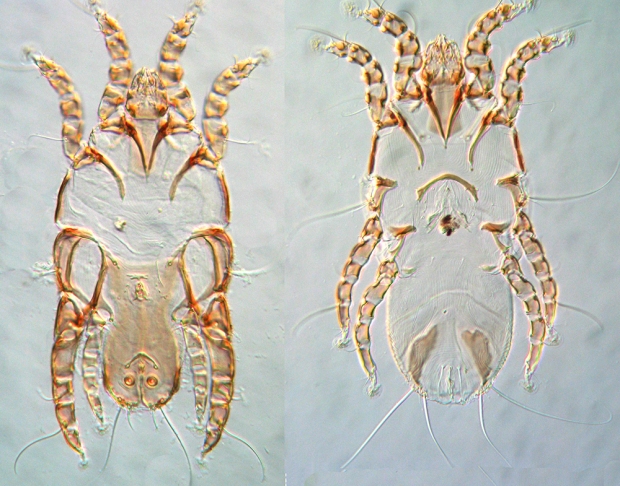 When I looked at the louse under the compound scope I thought its Malpighian tubules had burst out of its abdomen. At higher magnification, the tubules turned out to be hyphae.

I figured it must be a member of the Laboulbeniales, fascinating and highly modified ascomycotan fungi: look here and here! Almost all of the 2000 or so described species are ectoparasites – or perhaps in some cases harmless commensals – of living arthropods. One species has achieved recent notoriety due to its spreading from a native ladybird in the U.K. to an invasive one. I had seen them on various critters before, including beetles and mites, though never on a feather louse. But Googling revealed that in 1951, Wolfdietrich Eichler had published an interesting overview of the Laboulbeniales he’d seen on lice from birds*.

They were all from the genus Trenomyces. I asked my mycologist friend Randy Currah if he could tell whether the fungus on my louse was one that Eichler had identified. He referred me to Meredith Blackwell at Louisiana State University. She identified the images as a Trenomyces sp. (like Eickler’s) and then sent the images I emailed to her to Danny Haelewaters at Harvard University. I’m not sure whether Danny will be able to get it to species based on my bad photos, but if he does I will update. UPDATE (22 Aug 2015) – Danny has just identified the fungus as Trenomyces circinans Thaxter, a new record for Canada. Thanks, Danny!

Closer view of the Trenomyces showing a big ascocarp, two ascospores (lower right) and juvenile multiseptate things that probably have proper names but I will just call ‘babies’.

This summer the arthropodologists in my department are being moved from one building to another, as part of the mysterious game of reshuffling that university administrators so enjoy. As preparation for the move, I’m downsizing the contents of my filing cabinets. In a folder from 2004 I found this collection of drawings from the first time I taught Biology 108, Introduction to Biological Diversity. I had given two lectures on arthropods with a strong emphasis on differences in appendages and tagmata among the major groups. This is what I thought was an easy bonus question on the final exam: draw a spider and label the relevant parts. Here is a selection of drawings, from ‘quite respectable’ to ‘huh?’. 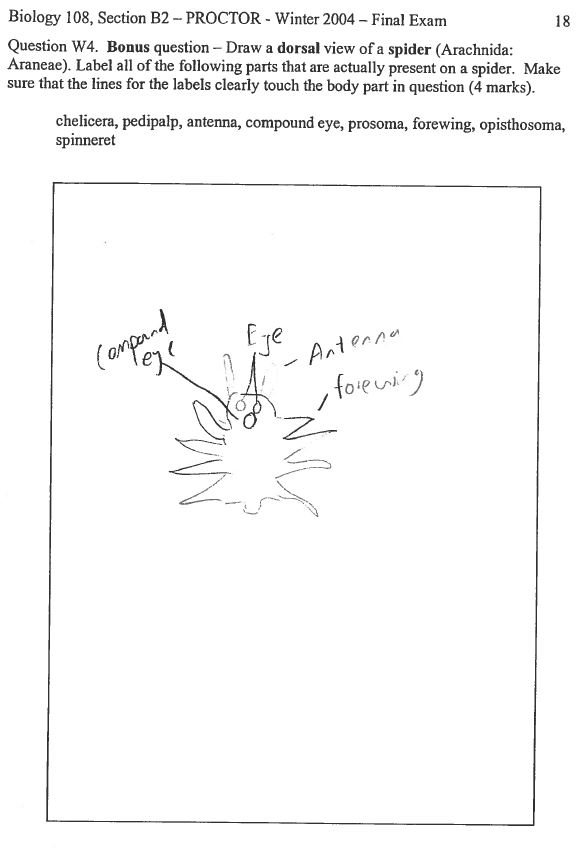 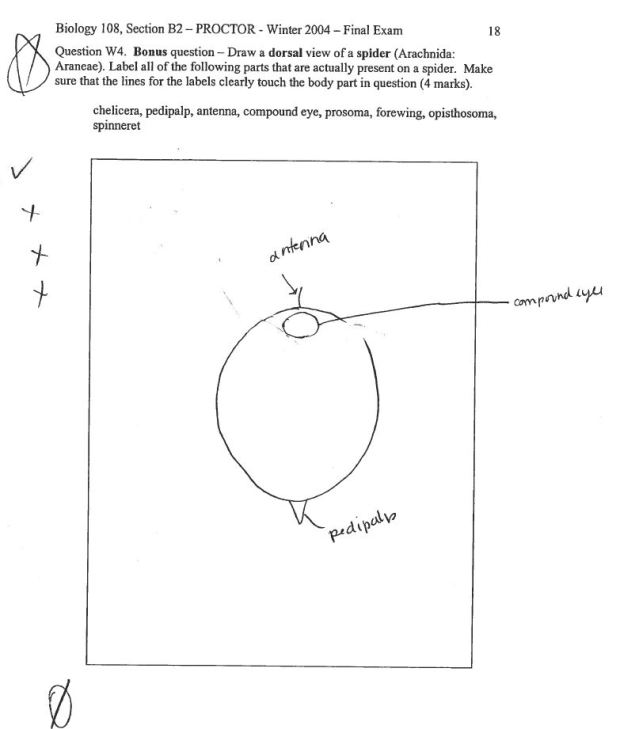 Based on the last image, some university students believe that spiders should be speared on toothpicks and served in martinis.

*apologies to Facebook friends who’ve already seen a version of this.